I’m not getting paid for advertising how great Tylenol Simply Sleep is, but if you’d like me to review your product, I will happily accept cash or check to try your product and then write allll about it.

Another side note: I don’t know how to write this without sounding like a drug addict, so I’ll just say that I’m not a drug addict and trust that you’ll believe me.  (I’ll do my best to refrain from calling Simply Sleep a magical pill.)


If I have an ailment, I will take a pill for it.  Headache?  Give me an Excedrin.  Cold?  (Gently) toss me the Advil Cold & Sinus during the day and Nyquil at night.  Upset stomach? Pop a couple of Pepcid AC, the chewable kind, NOT the disgusting liquid that makes you feel worse.  Anyways, you get my drift.  If I have trouble sleeping and it’s before 11 PM, I will take Simply Sleep.  It is a magical pill that lets me drift off into a simple slumber without the tossing and turning that I would be suffering without it.  I don’t take it often, only when I’m desperate.


I recently began traveling to other hemispheres and the plane rides are LONG.  And airplane chairs are getting more uncomfortable by the trip.  When I take an overnight flight that is over 10 hours, I take Simply Sleep so that I can kind of sleep on the plane.  It doesn’t work as well when you’re sitting in an airplane chair, but I can at least fall asleep for an hour, wake up and shift around in the chair, and then fall asleep again.  Repeat.


When I was coming home from South Africa a few weeks ago, there were two men standing behind me in the line to get on the plane.  A guy that was around 50, and another older guy in his upper 70s.  But this older guy?  He had a spark to him that made me laugh.  He was tall and gangly, and he wore a red baseball cap.  And a jean jacket vest.  And he had a laugh like a cartoon character.  I got all of this information from standing in front of him in line and listening to his conversation with the younger guy.


While I was eavesdropping standing there minding my own business, I accidentally heard the old guy ask the younger guy if he had anything to take on the plane to sleep.  My ears perked up.  I had something to take for sleeping on the 17 hour plane ride!  Ask me, ask me!! When the younger guy declined, I turned around.


Sara: I have something to take.
Men: … What?
Sara: I have some sleeping pills if you want to take some.  They really work well.
Old man: Really?
Younger man: Sleeping pills?
Sara: I mean, it’s only Tylenol Simply Sleep, so it’s not some prescription or anything… You can buy it at Wal-Mart or Walgreens.  Or anywhere.
Old man: I’d love some!
Younger man: … I’ll take a couple.
Sara: Great!  Hang on a sec…


And I proceeded to rummage through my bag while standing in the line waiting to board the airplane surrounded by a ton of people.  I found the beloved bottle and gave them each two blue pills.

What I probably looked like to the surrounding strangers that heard me offering other strangers drugs:

And then we spent the next 20 minutes making small talk and choosing not to discuss what could have been interpreted as an illegal drug deal in the Johannesburg airport.  In hindsight, it probably wasn’t the best idea to offer drugs to two men that I had never met before while surrounded by complete strangers, any of whom could have been an undercover spy waiting to bust some drug ring in the airport that I’m unaware of.

After we landed in Atlanta and were going through customs, I ran into my new friends in the line.  They both slept great!  And asked me again what this miracle drug was that I gave them.  So I told them, and I told them where they could get it.  I felt like such a nice person, making their travels so much easier.


One of my friends is going on a long overnight trip to Asia, so I told her about Simply Sleep too.  She sent me a message a couple of days ago: 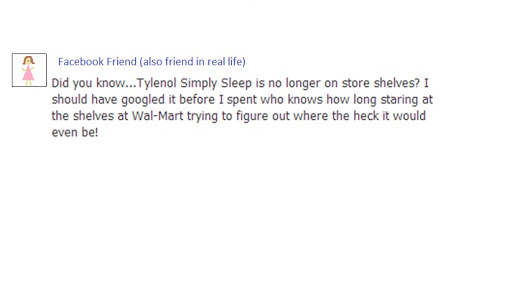 Can you BELIEVE this DEVASTATING news??  I refuse to believe it.  I JUST recommended this drug to strangers!  They believed in me, and now I’ve deceived them.


The moral of the story is that you shouldn’t recommend drugs to people unless you’re sure that they can get them legally off of the Wal-Mart shelves and not have to get them from a stranger in an airport.


Off to find some new pills…