I gave you all the tour de casa Romenesko a few months ago, and our house looked a little sad because we still had our Christmas tree up, but there weren’t any decorations or lights on it.  There weren’t very many decorations on the walls, and there were two entertainment centers in the living room.


I am pleased to announce that our house is really starting to look like a home, and I’m loving it more and more every day.  This is largely due to the fact that I’ve had the largest stretch of time not traveling for work since we’ve moved into the house, so since I’m in it all the time I want to make it look nicer because I don’t like looking at ugly things.  Which is why I married such a stud.


I think that another reason that I’ve been doing so much in our house lately is because LIVING UP NORTH SUCKS and the weather has been awful and it’s been the longest winter OF ALL TIME.  No, seriously.  All of you people on the east coast that were posting on Facebook a couple weeks ago “80 degrees?  I wanted spring not summer!!”  Well EFF THAT because it’s still WINTER here.  Don’t be complaining about nice summer weather when other people are trudging through the SNOW when they are supposed to be planting flowers. 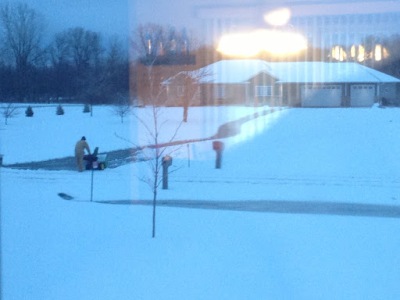 This is what I woke up to last week.  I think it was Wednesday?  Anyways, that’s a picture of my neighbor SNOW BLOWING HIS DRIVEWAY IN CARHARTT COVERALLS IN APRIL that I creepily took before going to work.

This is Peter shoveling part of our driveway when I made him wake up because I was in such a crabby mood because of the stupid snow.  (Let’s just take a moment and thank the heavens it wasn’t snowing mid-April last year when our wedding was only 2 weeks away.  Seriously, that would have been BAD.)  I had ice cream for lunch last Thursday because I was so depressed about the weather.  I don’t usually complain about the weather.  But it is snowing in April, so I’m allowing myself a free pass.

The snow just melted on MONDAY and GUESS WHAT.  I’ll show you what.

These pictures are above our couch, but I didn’t take a picture of the whole wall because we accidentally hung them too high… So I’m going to get around to lengthening those strings sometime…

Only one entertainment center!  No Christmas tree!!  Pretty decorations!  And new lamps!!  When the TV gets hung on the wall EVENTUALLY, the clock will probably move a bit.  But there was a nail there, so I decided what the hay and hung the clock there anyways. 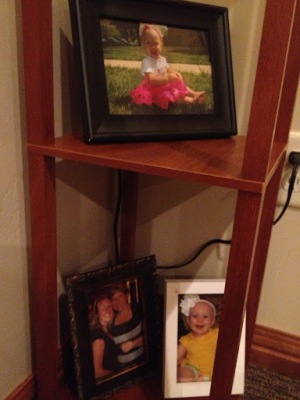 Can you tell we love baby Nora who’s not such a baby anymore?  And my mom.  I felt that I should put a picture of my mom in the living room since she was the person who came up with the living room decor.  And I love her.

Decorations above the cabinets!  Chickens!!!  Both of my grandma’s had chicken decorated kitchens, and since I have the chicken clock from my Grandma Ann’s kitchen, I figured that I could put a couple of chickens above the cabinets to tie it all together. 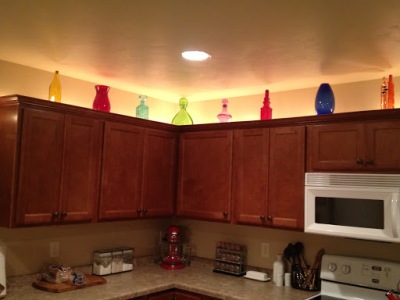 Look at how clean our house is!  I’ve been spring-cleaning up a storm lately, and every morning before I leave for work I tell Peter “DON’T YOU MESS UP THIS HOUSE!!”  He doesn’t.  He’s actually quite clean.  But I just feel the need to tell him that because it’s important.

Our multi-cultural bathroom with trinkets from Hawaii, St. Thomas, the Florida Keys, Mexico, Ecuador, and South Africa.  The frames are American though.  Well, they are from Kohl’s, so they were probably made in another country…  But it’s the multi-cultural bathroom, so that makes it better, actually.  Anyways. 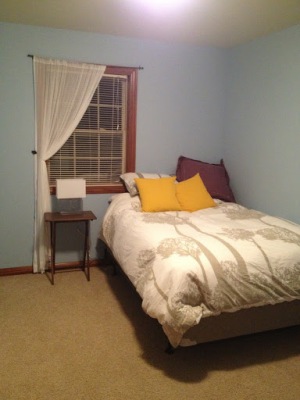 We finally have a guest room that’s a GUEST ROOM and not a JUNK room!  Complete with a curtain and lamp!  Come visit us, please, we spent good money on that mattress. 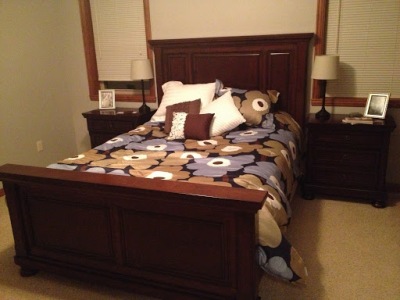 I have been looking for a new comforter for MONTHS and FINALLY found one that Peter said, “Hey, I like that!” so I immediately purchased it, and then when it arrived I put it on our bed and rolled all over it so that he couldn’t take it back.  And then last weekend I got some throw pillows and now the look is complete!  The walls look green in this picture, but they’re actually light grey…  What color curtains should I get?  Also, if you look REALLY closely, I put a picture of me on Peter’s nightstand (the one on the left) because I’ve been told that I’m not a very attractive sleeper, so I thought that if Peter wakes up in the morning and is like AH! She’s scary!! he can look at the picture of me looking all beautiful on our wedding day and remember that he loves me and I’m not usually scary.  Not that he only loves me for my good looks or anything.  Please, he’s not that shallow.  (But I put a picture of him on my nightstand too because I did only marry him for his good looks.)  (Just kidding.  I just wanted a picture of my handsome steed on my nightstand.) 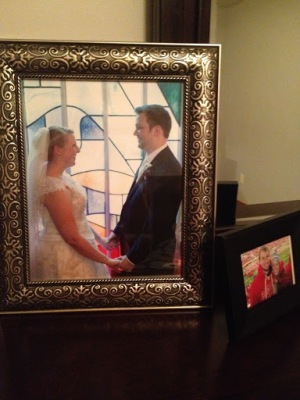 This picture is not hung on the wall yet, but I have it on our dresser and wanted to put it on my blog because I love it.  I love this picture SO MUCH because my mom and dad have a picture JUST LIKE THIS ONE from their wedding day.  Standing in front of the same church window, looking lovingly into each others’ eyes.  Their picture is hanging in their bedroom, so it’s only fitting that our picture be hanging in our bedroom too.  We actually don’t have anything on our bedroom walls yet because I really want the other dresser that goes with our bedroom set before we decide where we’re pounding nails in the walls.  (I FINALLY got Peter to agree to getting it so now we’re just waiting for a holiday sale at the furniture store.)

Anyways, our house is getting more homey now, and it makes me really happy.  Now if the weather would cooperate and we could put our grill outside, that would be fantastic!

Also, I was serious when I asked you what color curtains I should get for our bedroom.  This is a more realistic picture of the wall color, but remember that is has to match the NEW comforter, not the old one. 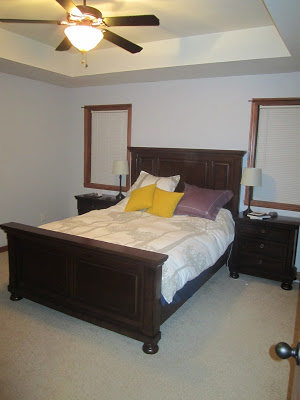 1 thought on “Making our house a home.”