I’m telling you, it’s a miracle that I made it home alive.


Kind of a bittersweet thing, thinking about being home for a year.  On the one hand, I love America, so that’s good.  On the other hand, as Jenna put it, “You’ve been boring for a year.”  Thanks.


You know, I’m a whole new person now that I’ve lived in a different country.  It’s CHANGED me.


I’ll be honest though.  There are things that I do miss about Ecuador.  Like being able to hop on an airplane and take a weekend getaway… every weekend.  Like laughing with my friends about how ridiculous we looked being so tall all the time.  Like speaking Spanish all the time.  Like trying new things and being pushed out of my comfort zone.  Like eating all-you-can-eat sushi for $13.  Like making new friends from all over the world.


Anyways, in the last year not very much has happened, but a few kind of big things happened.


August 2010: I didn’t do anything with myself.  I laid in the sun, and I visited Peter, and I spent a lot of time with my grandma, and I ate a lot of ice cream.


September 2010: I started having a panic attack because it would probably be beneficial for me to start maybe looking more seriously for a full time job.  I mean, I can’t live with my parents forever.  I also started having a panic attack because I was running short on funds, so I started working for my dad on a regular basis.


October 2010: Working for my dad wasn’t enough, so I started nannying for twin 6 year old boys in a house that had a lot of mice that ran around in the kitchen and living room while I sat on the couch with my shoes next to me and called Peter to tell him that I was scared (to which he replied, “Well Sar, I don’t know what you want me to do.  I mean, I’m in De Pere…”).  October was the first of three months where I was tired all the time and I really started feeling bad for farmers and realizing I didn’t want to be one.  I was getting about 4 hours of sleep a night with minimal napping during the day.  Because I was tired, I was kind of crabby.  Oops.

November 2010: I finally started getting some replies for jobs that I had applied for.  We grieved for my grandma that passed away, and we thanked God when our farm didn’t have damage in the tornado that struck just 3 miles away, demolishing another farm.  I cried when I was in a house with no basement during the tornado because I was hiding in a broom closet that I saw the mice go in a out of.  The tornado touched down only a mile from where I was.  Divine intervention.


December 2010: I interviewed for a position in northeastern Wisconsin, hoping that I would get an offer because I had found the perfect job in the location that I wanted to be.  I screamed when I got off the phone after an offer.  Christmas, apartment hunting, and moving were all in a one week whirlwind.  I cried when Mom and Dad drove out of the parking lot of my new apartment.


January 3, 2011: I started my career, and then I started blogging about my adult life, so you know the rest…


Overall, it’s been a good year.  But time can slow down, just a little.  People are right when they say it just keeps going by faster. 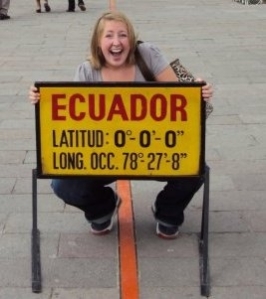