A lot of people ask me if I’m fluent in Spanish.

Back to English sucking.

Take the word “let” for example.  YOU try explaining this word to someone who can’t understand English.  I’ll even LET you describe it in English!  Here’s your homework: come up with a GOOD explanation for what the word “let” means in each of the following examples.
See what I mean?


Or how about the phenomenon known as the letter “g”.


One thing that I love about Spanish, is that it’s one of the romance languages.  That means that they have a lot of different ways to say things that English only has one way of saying.  In Spanish, when you’re in love with someone, there are so many different ways to put it.  But they would sound just DUMB in English.


Peter is my boyfriend.  In English, I call him “boyfriend” and that’s it.  Done.  Boyfriend.  BORING.  If you break down the word, it is friend who is a boy.  Oh how fun and exciting and meaningful.


But in SPANISH, which is AWESOME, there isn’t just the word “boyfriend”.  They have these amazing ways of telling the world that they are devoted to someone, and they are SERIOUS about it.  Translations being: my love, my heart, my soul, my life, love of my life, and lover.  Now, I KNOW that in English I could be saying all of these things.  But really… Think about how THAT would go.


Sara: Peter, my soul, pass me the salt.


Mmmhmmm not happening.  It just sounds so much better in Spanish.


So anyways, English sucks because whenever I say things like “love of my life” to Peter, he gives me the look that says “I know you’re going to ask me for something, but since you’re prefacing it with ‘love of my life’ I’m not going to give it to you.”


Here is a poster that I had to make while I was a teacher about language. 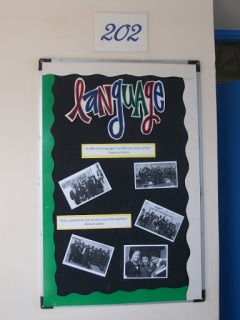 And here is a picture of a poster that was in the school that I taught at.  And NO, you jerks, it is NOT one of my students’ work. 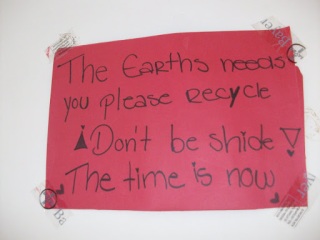