2017 has been another one for the books in the Romenesko house. I feel like the fact that I have posted only a handful of blogs all year is an indication of how hectic our lives have been, but (most of the time) we wouldn’t have it any other way. So here is a year’s worth of blog posts in one! As I always do, I’m vowing to stay more up-to-date in the blogosphere in 2018. I love looking back on the random posts I’ve written, and know that in five years I’ll be like “So, what did we actually do in 2016 and 2017? Nothing? Ok!” And then I’ll be like “OH YEAH we had Elijah in 2017!”

January was a really exciting month because we had our 20-week ultrasound where we found out that we were having another baby BOY. Pete was nervous about me finding out the gender of the baby because girls rule and boys drool… because I really wanted a girl. I had convinced myself that if we were having another boy it would actually be amazing because HI I’M FORCING THEM TO BE BEST FRIENDS and because two boys born in the same month = all clothes will be same size/same season. It was very obvious that the baby was a boy, and we were thrilled that Daniel would have a little brother. Peter was thrilled that we wouldn’t go broke because I would be buying pink EVERYTHING. Win-win amIright?

February. I legit can’t remember what happened in February except that Peter had a birthday, but I can’t even remember if I gave him a gift or if we celebrated. For some reason I think that Peter was traveling in Mexico on his birthday, but that might have been a few years ago… [Confirmed: this was the case in 2015. Although, he did go to Mexico in February of this year – just not on his birthday.]

On April 15, the travel ban I enacted on Peter went into place. After he got back from India just days before Daniel was born, I was not about to have that happen with the second baby. I made sure anyone who would listen knew that Peter was not allowed to travel after April 15, and you’re not even going to believe me when I tell you all my hollering finally worked for something! Ha! In April, we also moved Daniel to his big boy room so he basically is like, one step away from moving out of the house, and I was (and clearly still am) feeling a lot of emotions about him being in a big-boy bed. 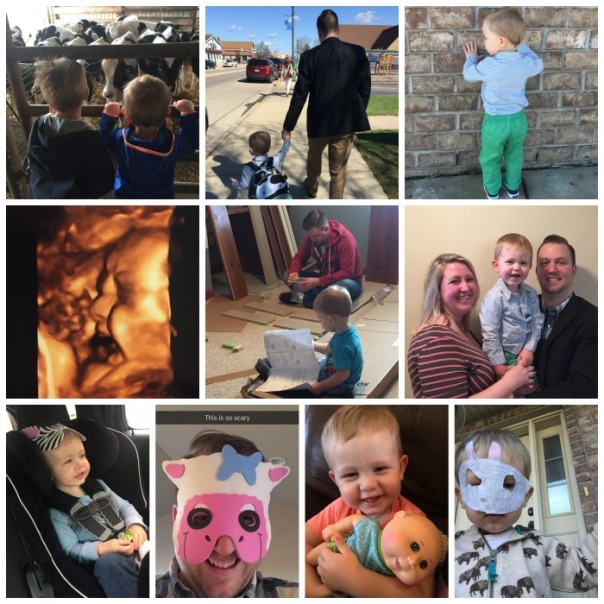 May was a very eventful month for a few reasons. On the 7th, Daniel turned two. TWO. I cried a little bit on his birthday because this little boy who is so full of energy and love is growing up and frankly, I’m just not ready for it. We celebrated by spending the day at the zoo and just making sure we loved on him as much as we possibly could/he would let us. It was such a gorgeous day. For his birthday, we got him a kitchen set, and it’s a big hit. He still plays with it every day.

The day after his birthday, I was like “OK BABY, COME ON OUT ANYTIME NOW.” This was also the time Daniel walked around with a hornet’s nest in his hand saying “Look Mommy, bees!” That didn’t send me into labor, so I knew the baby was not going to come by himself.

And then I was walking around 5 cm dilated for like 3 days before I got induced and Elijah was born. I’m still amazed at how perfectly he fit into our little family. Like a good mom, my first words to him were “Oh my gosh, he looks just like Daniel!” And you know what? He STILL looks just like Daniel, so at least I was accurate.

June was a very splendid month for a variety of reasons. One being hello baby snuggles galore and another is that it was my BIRTHDAY and a BIG BIRTHDAY at that. I turned 30 and was shockingly unaffected by the number. It probably had to do with exhaustion, but who am I to say?

Pete had a big surprise in store for me and had gathered our families and some of our closest friends in Lake Geneva at my parents’ house for a wonderful surprise party. Some of our favorite friends from Shawano made the trek down, and my darling friend Brenda drove over from Michigan and I cried and it was SO WONDERFUL. As I’m typing this, I’m like “Why didn’t I write a blog post about this??” 🙄

Also in June was Peter’s first trip post Elijah, and I was like, “Well, I’m not equipped to be at home by myself for a week with these two hooligans” when Elijah was only 5 weeks old, so we stayed at my parents and it was wonderful.

Anyways, one of my favorite pictures of me and the boys was taken the morning of my actual birthday. I have bags under my eyes and my crow’s feet are out in full force. I remember just being so tired. So, so tired. Daniel came downstairs and wanted to cuddle with me, so we scootched over and all snuggled in the wee hours of the morning. As I’m looking at this picture almost 6 months later, all I’m thinking is about how happy my heart is in this very moment. 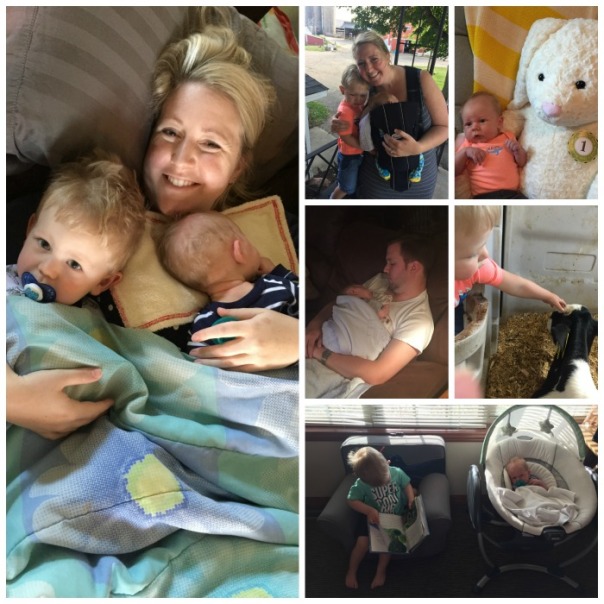 Ok, in July Marty got married and it was so wonderful and beautiful and I get all warm and fuzzy thinking about the day! I also get really sweaty because it was about 100 degrees outside and I had two kids hanging all over me, but the day wasn’t about me, so whatever. I also need to draw attention to this magical dress that I had that DIDN’T SHOW SWEAT. I mean. Talk about miracles. 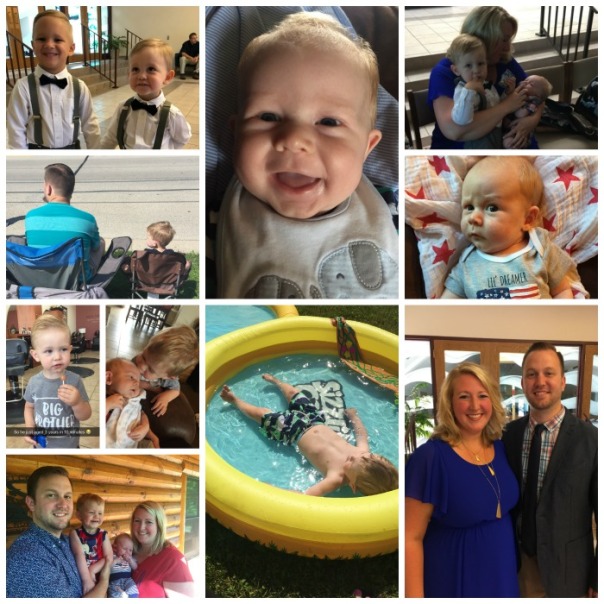 In August Pete went on another trip, and I stayed at home with the boys by myself. We all survived. Pete, on the other hand, was preparing to NOT survive. Pete, his dad, his uncles and his cousins went to Isle Royale, a national park in Lake Superior. Fortunately, he survived. It must have been because he was so prepared. Anyways, the REALLY big news is that I went back to work and had all sorts of emotions. I kind of feel like we’re still adjusting, but I mean, aren’t we always??

We celebrated September with a trip to the Walworth County Fair where Elijah slept a lot in the stroller (rookie) and Daniel was in heaven being able to see animals and tractors and he also got yelled at a lot because he wanted to walk around by himself. Two year olds are always sunshine and rainbows and you never want to like, leave them somewhere “by accident.” Anyone who tells you otherwise is lying. At the end of the month I went on a sister/mom trip to Vegas to celebrate my youngest sister Rachel’s 21st birthday. I bought a 100-ounce thing of piña colada and some other delicious rum drink and you guys, I made more friends in the eleven minutes it took to get back to the hotel room than I have in the last two years. It was amazing. Oh, we also saw J Lo and I didn’t know what my life was missing until I saw her in concert. Amazing.

In October Elijah got baptized. Peter was in charge of putting his baptismal gown on when I went to find the priest, and when I came back, Pete had put it on OVER his not-cute outfit, so Elijah was really sweaty (poor kid got that from me), and I had to keep shoving his sleeves up so they didn’t show in the pictures. It was great. We also took the kids trick or treating for the first time, and I DIED because Daniel was SO ADORABLE going up to the houses. It was a big meltdown when costumes had to come off, so I hid Daniel’s costume that night and we haven’t had any problems since. We also hid the candy right when we got home, so Daniel actually hasn’t even had one piece, but somehow there’s none left.

I can’t really remember November and it was only a couple of weeks ago, but I think it was pretty great because we were so close to Christmas and it also went by SO FAST.

And now we’re in December and I’m really confused as to how this year is already only weeks away from being over. We are in this incredible season of life where we’re constantly exhausted, there are always toys scattered on the floor and laundry in the dryer, but I can honestly, honestly say that I’ve never felt more complete and just… full. My heart and my soul. (And at this moment, my stomach.) I can’t imagine this life any differently, although I could stand for less timeouts. But I will say that for every timeout that Daniel has, there are about a billion hugs and kisses, so it all works out in the end.

As we reflect on the last year, we want to wish all of our friends and family the merriest Christmas season. We hope you are finding the good in each day, and go to bed each night feeling fulfilled.

Wishing you many Christmas blessings during this wonderful time of year – 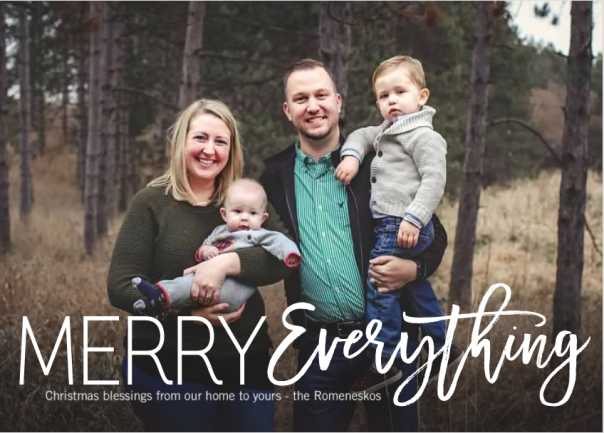 PS: Read our past letters here – our lives have changed a lot! But you can’t read about 2016 because I didn’t write about it and I still regret it.

PS again: I feel the need to point out that all of the photos came from my collection and not Peter’s because I did this post when he was traveling, and I just didn’t have the patience to ask him to sift through all of his photos. So that’s why there are more pictures of me and the kids vs. him and the kids.

Ok done now, go celebrate the season and be filled with Christmas joy and cheer!!