My college roommate introduced me to Pinterest a good 6 months before it took the world by storm.  I immediately fell in love with the site.  Perusing it for hours, looking at recipes and planning my entire wedding from centerpieces to my dress, an embarrassing number of months before Peter proposed (but at least I was in a serious relationship that was certainly going to turn into marriage??) decorating my future house including signs that said ROMENESKO est. xxxx, ##, 201# and a nursery.  Pinterest allowed me to create my perfect world that included a restaurant sized kitchen with the most high-tech appliances and a house complete with a spiral staircase, hidden playroom beyond my future child’s closet (a la Chronicles of Narnia) and an infinity pool in the backyard that was complete with a fire pit smack dab in the center.  To achieve these dreams, I would have to either find a sugar daddy or win the lottery, none of which looked bright in my future.

Since my wedding was planned by YOU, I only ended up using one idea from Pinterest during the entire day (adorable ring bearer carrying a sign that said “Peter, here comes your bride” – that I paid someone to do), but honestly couldn’t have been happier, since we had the best wedding of all time.  Another reason that I was soooo happy my Pinterest wedding didn’t work out was because About 97% of the things that I was planning on including in my wedding were DIY (do-it-yourself for you incredibly smart, non-Pinterest, non-craft junkies).

THAT is what makes Pinterest ABSOLUTELY AWFUL.  I mean seriously, whyyyy do I think that I am a super duper craft queen with all the time and patience in the world to be able to do some of these things?  I WANT TO BE TALENTED LIKE THESE OTHER CRAFT QUEENS, and it usually doesn’t work out.

When Peter and I bought our house, I was like OHMYGOD NOW ALL OF MY PINTEREST DREAMS CAN COME TRUE!!!!!!!!

Well.  We’ve been living in the house for over a year now, and let me tell you the God honest truth: Pinterest can suck it.

There are a few projects that I’ve done that I’ve found on Pinterest that have been successful and made me happy.  This ornament wreath, for one. 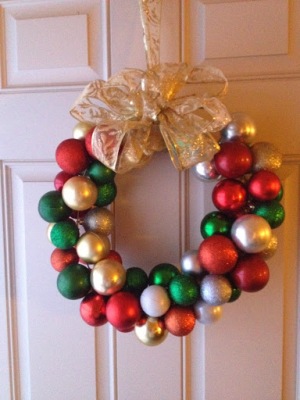 It’s into it’s second Christmas season and cost about $5.00 to make.  I don’t calculate my time into that equation… But that’s another story.

I’m mentally walking through every corner of our house trying to find other Pinterest projects and can’t think of any that are completed.  I’m finding several spaces where I’m thinking “OMG, Sar!  Remember when you were going to do THIS????  Better make a note of it.”  I’m also finding several unfinished projects, ideas which originally sprouted from Pinterest.

Exhibit A: The tale of the wood paneled basement. 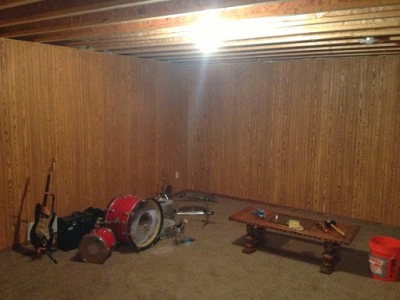 Our house was built in 2010.  Why the original owners would put wood paneling in the basement is beyond us, ugly, and quite honestly has become a huge pain in the tush.  So, one day I was looking for house ideas on Pinterest and after several clicks, I came across a horribly wonderful blog called Young House Love.  These people are the ULTIMATE DIYers, and my GAWD are they amazing.  One of their projects was painting the wood paneling in their house that they were remodeling.

Ah ha!  What a splendid idea!  I proposed the idea to Peter, who was less than wild about the project.  He was all “Why don’t we just pay someone to finish the basement?”  and I was all “Because we can save so much money, and I don’t want to finish the basement because it will give me another level of house to clean.”  And he was all “I am not supporting this idea.”  And then I made a HUGE mistake and was all “I’ll make it my project!  You don’t even have to help me!”  And he was all “We’ll see…..”  And let me tell you: a Peter never forgets…

So I was super motivated to paint the basement.  I did a lot of research, including making B take pictures of her parents house where they painted the wood paneling to show Peter that NORMAL PEOPLE can do this too, not just professional DIYers.  And “Peter, if B’s family can do it, I can TOTALLY do it!!”

Peter and I went to the hardware store in town and got all of the necessary equipment.  The next day, I went down to the basement and I started priming.

And THREE COATS of primer, about 6 gallons of sweat, and a few tears later, I was done.  Done in the sense of mentally and emotionally.  Unfortunately, not physically.  I hated this project.  HATED.  WHYYYYY did I ever think that I could do this on my own?  Why had a confidently told Peter that this would be my project and it would look fabulous?

I started this project at the end of September after we picked out new living room furniture.  My goal was to have the basement FINISHED (primed, painted, AND trim painted) before the new furniture arrived.

September 28 – I started the basement project.

October 17 – New furniture was delivered and I had to tell the furniture movers to put the old furniture in the center of the basement because I needed to finish painting the damn walls.

December 26 – I avoid going down to the basement because I hate looking at the unfinished walls. 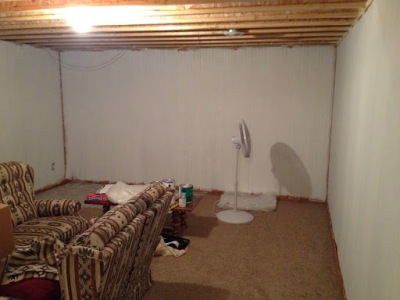 It is physically paining me to look at this picture.

Now that I’ve exposed myself to the entire world, I have a new goal: to FINISH painting the basement before I start traveling at the end of January.

In similar news, the project that I started in MAY is FINALLY (almost) finished because my mom gave me the best Christmas present ever (see item #7 on my Christmas list: “White picture frames (all sizes) so that I can finish the STUPID hallway project.”)

Another Pinterest project that I made SO MUCH MORE COMPLICATED THAN NECESSARY by wanting to paint cool frames white and hang them on the wall, when instead I could have just gone to Wal-Mart as my genius mother did and bought white frames.  All I have to do is buy a few more picture frames and I’ll be good to go!  Woohoo!

The hallway has had some variation of the above picture for ummmmm 6 months.  I thought I was being a genius when I decided to scrounge Goodwill for cool looking picture frames and then painted them white.  I then (PINTEREST ALERT) traced the frames onto wrapping paper so that I could space them out perfectly and see almost exactly what the wall would look like.
Well, it was all going fantastically until I didn’t read the instructions on the spray paint can.  Did you know that there is a small window of time that is less than overnight that you can do another layer of spray paint?  Well, you do now.  Alas, all of my frames were ruined.  So then, obviously I was REALLY discouraged and hated the STUPID project and STUPID Pinterest for telling me how EASY this DUMB idea was.
In comes my superwoman mother, buying me nice, simple, wonderful frames to put in the hallway.  This sparked a new motivation for me, and a few hours later, all the nails are in place and I’m THIS CLOSE [—-] to having the hallway finished.

Now on to choosing pictures to put in the frames….

2 thoughts on “D.I.Whyyyyyy am I doing this to myself?”