I have some news.

So exciting that every time I’ve started a new blog post since June 22 I’ve almost spilled the beans and haven’t been able to finish the post.  (There are 5 started posts in my draft folder right now.) 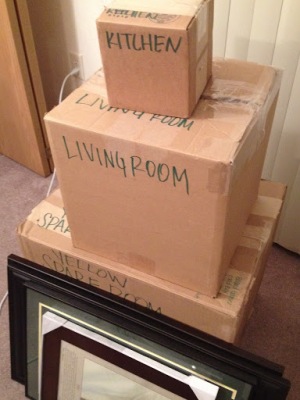 Because we bought a house.

All the madness started with a dresser.  A DRESSER.  After we got back from the honeymoon and started moving all of Peter’s stuff into my our apartment, I was in a bit of a tizzy.  He has a lot of stuff.  I have a lot of stuff.  So where was all of this stuff going to go??

Now, our apartment is a two bedroom; the “master” bedroom even has two closets!  A very large and spacious walk-in, and then a good sized normal closet (what’s a normal closet called, anyway?).  And there’s a nice closet in the spare room.  And a large walk-in closet off of the living room.  And a linen closet.  And a coat closet.  Contrary to what you may be thinking, this apartment even has ROOMS, not just closets!  Large rooms!  When I moved in, I thought to myself, “What on EARTH am I going to do with all of this SPACE???”

Well, I found something to do with it.  And it was all fine and dandy until we got married and there would be two people sharing this large apartment that was built for two people, which one person who has the amount of stuff for two (ish) people currently occupied.  So when Peter moved in, I had to re-evaluate.

I cleared out the smaller closet in the bedroom to make room for Peter’s things, but he has a surprising amount of clothes, all of which he actually wears, for a man.  I would say that I have an average amount of clothes, shoes, and accessories for a woman.  Naturally they fill the entire walk-in closet.  So, I decided that we needed a dresser.  Let me rephrase that.  We needed a NEW dresser.  Peter had his toddler dresser that has drawers that are made for toddler clothes in his old apartment, and I wanted nothing to do with it.  But it came with Peter to our apartment.  Before we moved it into our apartment, I decided that we needed a new dresser.  An ADULT dresser.

I already knew just the one I wanted – the same one that my friend has in her bedroom.  It’s big and beautiful and I coveted it from day one (she’s not my neighbor, and she doesn’t have a wife, so it wasn’t a sin).  I knew where she got it and how much it cost.  I had done my research and gotten the approval of my spouse to buy a dresser.  So Peter and I made a trip to Ashley Furniture.

I found the exact dresser that I wanted and was very excited.  And then Peter sat down on one of the beds.

Pete: “You know, Sar, instead of getting just a dresser, maybe we should get a bedroom set.”


Pete: “Well, that way you’ll have a matching set, and you won’t get mad when you come back to buy a bed and stuff, and they don’t have the matching set to your dresser anymore.”

So then we walked around the entire store again looking at bedroom sets.  We even picked one out!!  But then we decided not to buy it, because we wanted to take some measurements and make sure it would fit into our bedroom.  We left and went to dinner.

Pete: “Maybe we shouldn’t get a bedroom set at all.”

Sara: “Peter.  I am SO excited about getting a bedroom set, and now you’re not going to let me get one?  You just said we could get one!  We picked one out!”

Pete: “I’m not saying that you can’t EVER get a bedroom set.  I’m just saying that maybe we shouldn’t get one right now.”

Peter: “… Maybe we should start looking at houses… and then we can get a bedroom set… when we buy a house.”

Now, Peter and I have had the house discussion many times.  Many, many times.  Long story short: he has been ready to buy a house for a couple of years, but I’m a wimp and am scared to buy a house because it’s such a huge, permanent, EXPENSIVE decision.  And I can hardly stand being in our two bedroom apartment by myself during a storm, how in God’s name am I supposed to be in a HOUSE during a storm?????  AND because 2012 has been such a whirlwind already with the wedding craziness and job change that I just didn’t know if I could emotionally handle another HUGE change in such a short period of time.  I mean, seriously!  A year ago I thought Peter was proposing to me when he wasn’t, and then I had a huge meltdown because I didn’t think he’d EVER propose to me!  And now we’re already going on our fourth month of marriage!  I AM GETTING DIZZY JUST THINKING ABOUT IT.

So anyways, I didn’t want to talk about buying a house less than 3 weeks after we got married, so I was really adult about it and kept shoving food in my mouth because it’s rude to talk with your mouth full.  And then after 15 minutes of silent eating, I changed the subject.

The next morning, after a night of no sleep because I couldn’t stop thinking about the fact that I didn’t have any more excuses to delay a house (Before engagement: “There is NO WAY I’m buying a house with you if I don’t have a ring on my finger.” … Immediately after engagement: “We can’t afford a house!  We are going to be engaged for a year and a half because we are poor and need to save for the wedding!” …  Immediately after wedding chaos: “I just had 9 of the most stressful weeks of my life and now you want to buy a HOUSE??” … Three weeks after wedding chaos: *crickets chirping* [which coincidentally we hear all the time at the new house.  They sound much better there then they did when I was trying to think of an excuse not to buy a house]) I IM-ed Peter.

May 17th.me: I made a decision this morning on my way to work.
Peter: ok
me: I think that we shouldn’t get a bedroom set right now and we should move your dresser from the old apartment to our apartment. And I think that we should get a real estate agent and start looking at houses.
Peter: Wow. That was not what I was expecting your decision to be
me: What were you expecting?
Peter: I don’t know
That I should get my haircut today instead of tomorrow
me: Well, it’s a fact that interest rates are slowly starting to go up on houses, so I really think we should start looking.
Peter: I agree
me: So I’m putting you in charge of figuring out a real estate agent and all that stuff.
Peter: got it

Three hours later, I got an email from Peter.  “I got a real estate agent!!”  Well THAT happened faster than I thought it was going to!!


A few days later, Peter asked me what we were doing the following Tuesday.  “Nothing??  Great!!  We’re going to look at 4 houses!!!”


I felt a panic attack coming on.  This was happening WAY WAY WAY faster than I thought it was going to.  I knew that Peter REALLY wanted to start looking at houses.  So I agreed.  Because I knew that we wouldn’t be buying anything because there was NO WAY that I was going to sign those papers Peter is so wonderful and I just want him to be happy.


Over the next few weeks we looked at about a dozen houses.


And then something completely unexpected happened.


I fell in love with a house.  It was love at first sight as we were pulling up the driveway.  The brick outside. The beautiful inside.  The partially finished basement.  The yard, oh my, what a yard.


And suddenly, I had to have this house.  So Peter started working on it.  He researched loan rates, did the math on how much we could afford, made phone calls, and had meetings.  I went to Mexico for work, and my busy little bee kept at it.  When I came home from Mexico, we went to see the house again.  And we decided to make an offer.  And then I had a heart attack.


Our entire summer has been filled with signing papers, being afraid that we would get denied a loan, signing more papers, packing, thanking the Lord that we didn’t get denied the loan, and finally, on August 27, four months to the day after our wedding, moving.  I know that I committed myself to Peter before God and the church and our family and friends when we got married, but I only had to sign my name once for that.  ONCE.  Now that I’ve signed my name a kajillion times and we’re locked in to paying for this house for the next 30 years, I REALLY feel committed to Peter.  SUPER committed.

So, this is our house, and I am so scared beyond belief to be a homeowner because now I’m REALLY an adult  thrilled about it that I could just look at it all the time.  I may have to quit my job because I just like being inside our new house so much.  But I can’t do that because we have a mortgage payment, and if I quit my job we would lose the house that I already love more than almost anything in the world.  I didn’t know it was POSSIBLE to love an inanimate object so much.

I sure am happy that we didn’t buy that dresser.

1 thought on “It all started with a dresser…”